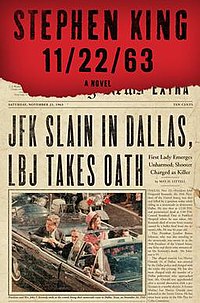 I really really want to review it, but . . . anybody noticed that I only tend to do write-ups for books that are either problematic (or offensive to my delicate sensibilities) or that I can use a step to get up on my soapbox? And King’s 11/22/63, it’s just a solid, well-told, strongly-written book. And, if we’re to believe the sign-off at the end, a book written in, what, six weeks? I mean, I’m usually not intimidated by how fast somebody else can kick a book out — more like challenged — but I’m sure this book has a lot of pages. I hit it on Kindle, but even there I could tell this was higher than the usual page-count.

Anyway, to not review it, let me just say that I think it’s his best since Lisey’s Story. Not that I didn’t dig Duma Key and Under the Dome and whatever else there’s been, but this one, I don’t know. It seemed to matter to him in a different way. That unmagic date, I mean, JFK, it all meant so much more to his generation than to mine (I’m born eight years and two months post-Dallas, I think. meaning Challenger is my JFK). But, even though time-travel should definitely allow him to get mired down in the quicksands of nostalgia — nope. He makes 1958 real, but he doesn’t slather it with the sentimental.

And, his language this time around, his word choice, it’s as on as I’ve ever seen him. And the story — I mean, sure, even twenty percent in you can sketch out how it’s going to end, what that closing scene’s going to look like, but still, it’s a testament to his storytelling that he absolutely keeps us hooked, keeps us reading. And nevermind that this is basically that wonderful “Wikihistory” story via Final Destination. Still and nevertheless, King gets us so invested in the outcome of each scene, each line of development, that you want to cheat, you want to turn ahead, or call in, vote the ending better, who cares if it makes a good story, you care about these people.

Anyway, for a way more complete list of time travel movies, click here. Looks like I forgot to put Triangle on my list, yep. And Philadelphia Experiment. But THEY forgot Buckaroo Bonzai, so maybe all’s fair. But, really, 11/22/63, that’s all you need for your December time-travel needs. It’s King at his absolute best, and a book that’s just a joy to read.