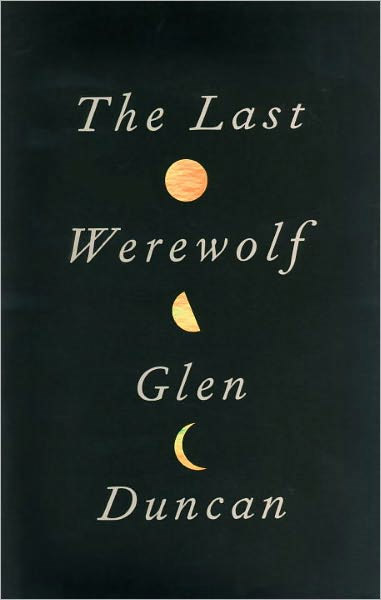 Glen Duncan’s The Last Werewolf. Will this werewolf be the only one to know regret? I’m only about a third through, but that’s a third in hardly any hours, so I’ll know soon. Anyway, completely digging it. Because, you know, it’s about werewolves, but also because it’s written so, so well. And, I mean, werewolves are fast, are perfect hunters—why wouldn’t they also be able to just reel off perfect lines page after page, right?

Also jammed through Donald Ray Pollock’s Devil All the Time, which rocked, and I recommend especially if you dug Knockemstiff, or if you were all into Outer Dark except, when you read Serpent Box years and years later, the two got mixed up in your head. Devil All the Time belongs in that mix-up.

China Mieville’s Perdido Street Station. My first Mieville—late to the party, I know, and no excuse, either. This guy can also seriously write, though I’ll admit, what he was using to hook me into this world, it wasn’t plot, it was is the world. Which I was very aware of, kept telling myself to get sick of, please, except . . . it’s such an interesting world. So, yeah, loving it, finding myself just sitting around with earbuds to get some more.

Since Star Trek TOS showed up on Netflix Instant, my son and I backed out of STNG (we were only three episodes in), are peeling back, seeing where and how it all started. And completely loving all these again. Aside from the odd episode, I mean, I haven’t hit these for probably twenty-five years, and that was purely a scattershot affair. Meaning some of these I haven’t seen. Loving them all, too. I have a communicator badge on the home screen of my phone, yes. What would Kirk do? Whatever he had to. And he’d make it work.

Of course, it is happening inside your head, Harry, but why on earth should that mean that it’s not real?

Harry Potter and the Deathly Hallows II. Completely loved it. Made me want to go back, re-read them all, except slower this time. Also, just watched the 73 Don’t Be Afraid of the Dark. Glad del Toro’s remaking it. These are the kinds of remakes we actually need: ones where the original’s broken. In this case, as The Shining and Burnt Offerings would each figure out a few years after 73, what was needed for the haunted house to properly scare (us) was a child. Even The Messengers got that one right. Also, very excited for The Hunger Games on the big screen. It was a cool trilogy, and, like most good books, I read them all too fast. Also, same way Harlan Ellison got his name on Terminator, maybe Richard Bachman should get his name associated with Hunger Games, yeah? For The Long Walk.

A zombie course, “The Zombie Renaissance.” It’s on-line, is all kinds of fun. This is how I contribute to society: by prepping it for the plague. My class will be able to identify and discuss what’s happening to us in great and necessary detail.

That Taken miniseries. Remember? Except for Harper’s Island and Lonesome Dove, it’s maybe my favorite miniseries ever. Or maybe it is favorite. But surely I’m forgetting a lot. And probably I’m just have a relapse of Fox Mulder withdrawals. Kind of an annual thing.

Couple things. One’s an anthropological thriller. I’d like to say along the lines of Greg Bear, but I shouldn’t even be in the same sentence as him. I probably shouldn’t even know his name, am lucky just to have read the books. Anyway, I jammed down a hundred, hundred and twenty pages of it a couple of months ago, but then remembered I’d told Trapdoor I’d write the second Bunnyhead Chronicle for them in May (Once Upon a Time in Texas). So I did that. And have been assiduously researching all the anthro stuff meanwhile. Learning so, so much. When I first came to college, I mean, that was my major (not sure I ever told my advisors, though, as it wasn’t any of their business).

Also, as of about two weeks ago (maybe just a week?), I started a comic book script (that’s the title below; picking the font’s always the hardest part about starting something new). Just because I felt very challenged, both by Joe Hill’s Locke & Key, which has that kind of narrative choreography going on that intimidates me the same wasy Sandman does, and Garth Ennis’s Preacher, which is always able to reach into its own chest, pull another surprise out (and Local‘s a part of this as well). Anyway, mine’s just lookig to be a twelve-issue job, and I’m just nearing the end of the first issue. Taking my time with it, though, because if it’s not right, then everything after it’s wrong.

As for what I’ll do with it? If it comes together, find somebody to pitch it at. Anyway, it’s starting out solid. I’ve only jacked around with comic scripts before—that sprawling ATBS script I rigged together forever ago, which I won’t even link to because it has to suck?—but I’ve been reading a lot closer the last couple of years. Trying to get a feel for the grammar, the syntax, the tricks, the economy. Maybe it’ll work, maybe it won’t, but either way I’ll have learned something. And, I mean, comics are what I started out wanting to write. Kind of makes sense to keep that in mind.

Can’t say much yet, but there is some, and it’s good. Hopefully can announce officially inside of a week. It’s going to keep me even busier than usual, but that’s the only way to live, as far as I know. Left on my own, I just watch old Magnum PI episodes and play hackysack and read bowhunting and street-truck magazines. Not that those aren’t honorable pursuits, but they don’t directly put books on the shelves, and that’s got to be what it’s all about, always.