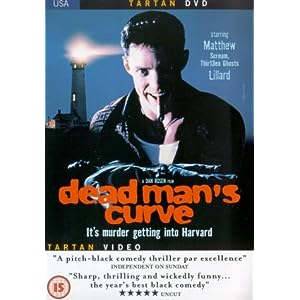 Man, I know: last week I hit Prometheus, and just did a status update somewhere saying it was decent, it was cool, and now here I am with a non-review of a movie fourteen years old already. Still. This one I want to talk about it for a short bit: 1998. Dan Rosen’s Dead Man’s Curve (on Netflix Instant as The Curve). This is two years after Scream changed the horror scene once and forever. One year after Scream 2 made the sequel legit again. One year after I Know What You Did Last Summer revived a nearly twenty-year-old YA novel, just to cash in on Scream’s success. The same year as The Faculty (Williamson again) and Urban Legend and IKWYDLS’s second installment. All of which is to say that the horror landscape post-Scream, you couldn’t even stand up, there were so many clones. And that’s not at all a bad thing. This makes slasher kind of stuff easy to ramp into production. Pretty soon we’d have Final Destination and its own clone, Soul Survivors. When the box office gets packed with gore like that, then competition breeds desperate escalations, each new film trying to outdo the last, and once the big budgets tail off, then you get true innovation. Stuff like All the Boys Love Mandy Lane. And then a Cabin in the Woods comes along to reset everything, in much the same way Scream did.

Near as I can tell, though, by 1998, Dead Man’s Curve (I call it that because of the excellent song, included — all the music in this is so spot-on, from Bauhaus to a version of “Cruel to be Kind”) was the only horror kind of film with that necessary Scream carryover: Matthew Lillard. Playing pretty much the same character, but come on, he can do it better than anybody else, can’t he?

And, while, yes, once upon a time Fatal Attraction had smuggled some of the slasher conventions across to ‘respectable’ drama, a more honest feat, I think, is to smuggle characters (and actors) and tone and setting over to something that’s finally not a slasher. Or, if you’re going to argue it’s any kind of slasher, then it’s one more like The Hole, say. I wouldn’t make that argument, though. Still: nubile, backstabbing college co-eds? Bodies stacking up? A police force that’s useless, parents who are absent? These are the bricks upon which the slasher has always built its bloody house.

I don’t want to give too much away, though. How about the association game: Dead Man’s Curve is Blood Simple via Murder by Numbers, with not just some Kaiser Soze fun at the end, but a series of turnabout’s-fair-play kind of fun at the end that’s reminiscent of pulling the mask off in Happy Birthday to Me (except earned), or the series of whodunit reveals in April Fool’s Day. But still. Watching it, what you’re thinking, it’s Tamara, say. Dan Rosen smuggled that tone out very well, and misled us with it, all to a bring us to a Cry_Wolf kind of ending, which would seem to depend absolutely on that same kind of longshot deviousness, but, really, is just kind of cynically banking on human nature, such that we all know we should have seen it coming the whole way.

I dug it, I mean. For some reason it put me in mind of The Oxford Murders. And of course Michael Varten conjures Alias for me, in the best way. What I can’t figure out is why I didn’t see it back when. Maybe it didn’t get distribution? Still. I was haunting every video shelf in the late nineties, writing Demon Theory. This should have been in those footnotes. Not only does it throw off just wild associational sparks, as all the boldface here maybe suggests, but it’s making its own in-jokes the whole time as well. It’s Dan Rosen telling us he knows film, sure — genre nods are necessary to establish authority — but it also makes us trust it. So, dial it up on Netflix. It’s a good time. Next time I see Dan Rosen, I’ll ask him all about it, I’m sure. And I love how they used the Ghostface phone-voice for the trailer (looks like embedding’s disabled on it, sorry) :