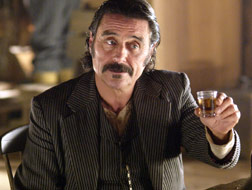 Or: The subject line that comes to mind now that I just finished up the Deadwood series. Or: just to write dialogue like that once, ever. I mean, yeah, it’s all kinds of fakey and staged and overblown, but it’s that kind of fakey and staged and overblown and David Mamet-y that feels like playwrights had a pen involved. The lines Swearengen and Bullock and Tolliver and the rest would deliver every episode, they always had this cool Elizabethan kind of vibe to them, though always undercut by just massive, over-the-top (yes, historically inaccurate) profanity, so that what finally gets across is the suspicion that the Old West was a lot more eloquent than any of us would have guessed—and we like the past to feel golden and ‘magic’ like that, because then it allows us to live in the ruins of that glory. Or, really, what the sculpted, impossible-to-think-of-on-the-spot-like-that lines leave us with finally is the pleasant suspicion that none of these rapidfire conversations are this-is-recorded real, that what we’re seeing and hearing here, it’s all prettied-up distillations. It’s dialogue, idealized, which is exactly what good fiction delivers. Is exactly the kind of tactic that can trick us into trusting a story, into believing the characters.

And, those characters. My favorite of the lot by far is Richardson, Farnum’s . . . I don’t know, whatever he is: squire? Love that guy, and the way he prays. But of course the show’s not built around Richardson. No, in Deadwood we never don’t know that Swearengen’s the protagonist here, that he’s the character who these events are going to shape, he’s the guy at the center of the action, the one whose decisions give shape to the plot. I mean, Bullock’s always listed as co-lead, I know, but he’s not nearly complicated enough to carry a story, I don’t think. He’s great as a boy scout with a gun, and I so envy the way Olyphant can make him walk without really using his arms, and I’m kind of head-over-heels for all the cool vests and stuff he’s fitted with every episode, but . . . the real test of a character for me, it’s asking if we know for sure how he or she’s going to act in any given situation. With Bullock, that’s a resounding yes. He’ll have all kinds of trauma to deal with and various social headaches to parse his way through, but his gaze, it’s seriously unwavering; he’s always going to walk the same line time and again. Al Swearengen, though, not so much. Just when you think he’s going to cede to his nature, his impulses, he’ll go the other way, and then, just when you think he’s a good guy, he’s got his knife in some undeserving character’s throat. He’s a pimp, a killer, an opportunist, but also, as his lackey Adams says, when he’s not lying he’s the most honest man you’ll ever meet. And that’s what makes a good character. One you both despise and, in the same instant, want to be. Whereas with Bullock we identify with his resolve, with Swearengen we identify with his nature—we’d like to dress like Bullock and walk like Bullock and shoot like Bullock, but we know that life’s not that simple, and that Swearengen’s personifying the opposite, the complicatedness of living, and so feels real, a person, not an automaton.

This isn’t to say Swearengen’s Tony Soprano either, though. Tony Soprano was unlikeable as well, of course, and for a lot of the same reasons, but he was always getting recuperated, his ‘badness’ getting explained away: he was a product of this, had been born into that, etc., such that time and again we were asked to pity the poor mob boss. David Milch never lets things get that out of hand in Deadwood, though. Granted, the ‘finale’—Deadwood ends in a good-enough place, but everybody says there’s more that’ll never get told—it’s no Sopranos finale, but maybe David Chase had been pulling the pity strings for five seasons in order to really get that last scene in the diner happening, yeah? So, without those strings in play, then no, Deadwood couldn’t end quite as strong. Still, and even though we always judge a series by how it ends—think Cheers, then think The X-Files—I think Deadwood wasn’t just the better written of the two series, but was one of the better series we’ve had.

Most series I end up involved with (that don’t get The Good Guys/Prey/Nowhere Man axe), after a couple of seasons I pick up the rules the writers are keeping themselves to, the ethical boundaries they’ve set for themselves. Not with content, with the story. The Wire, say; near as I could tell, there were two things at work there. The first was that nobody’s faithful to anything (that is, that everybody’s corrupt in some way), and the second was more optimistic: if you stay with a character long enough, you learn that they’re not that bad. Pryzbylewski, say (still, though, The Wire, by insisting upon a strict and unflinching realism, the only character it left available for us to identify with was Omar, a minor character, and thus the ‘protagonist’ of The Wire was more ‘crime,’ or ‘Baltimore,’ and that’s not good enough for me). Or, to simple it down, Star Trek: Next Generation. There what controlled each writing decision, it felt like, was the certainty that never wavering from your principles was the only way to solve the problem at hand. Or The X-Files, whose constraint must have been so, so stifling: none of this can ever actually be made public, because, if it were, then X-Files would lose its punch. The magic of it was that Fox was out there at the fringes of our world. But, should any of his CDs or photographs etc. have made it to the nightly news, that would divorce the ‘reality’ of X-Files from our own, thus taking away the story’s bite, as it would just be happening ‘over there,’ in fantasy-land.

Deadwood, though—and I can’t think of any other series that’s done this to me—I never got a sense of an ethic or constraint or even tendency in the writing. It never felt like this or that was getting priority, and the result is that the story then became so much more ‘possible.’ It wasn’t just operating between two yellow lines, no matter how wide, it was ranging over the whole plain. Like Lost, yeah, except Lost of course got lost, even made 24’s ‘mountain lion’ story thread feel organic (and Fringe seems to be currently getting Lost, and not in that fun and fake Alias way). Deadwood, though—and this is partially a function of the over-constructed dialogue—every little thing felt intentional (though I should say I grimaced when the actors came to town, but that was just because, A) I suspected the writers were indulging themselves, by including plays within plays, and B) I’d seen Heroes through by the time I got to Deadwood, so was very very suspicious of anything carnivalish rolling into the story). Right down to that little girl who gets saved from the “Indians,” seems like such a throwaway character, just there to introduce a few characters, to be a sort of catalyst to rally around, but then she becomes so pivotal, in her quiet way.

And, maybe what really allows me entry to the Old West of Deadwood, it’s that Wild Bill Hickock’s just as un-heroic as he was in Pete Dexter’s novel (though I miss the pink gin), it’s that Calamity Jane’s not her dime novel self, it’s that Wyatt Earp isn’t some spirit of justice incarnate. And it’s that everybody who calls the Sioux ‘dirtworshippers’ and all that, we always have the distinct sense that Milch is just letting them show their stupidity. But then Deadwood never really takes sides, either—it’s such a pleasurable frustration. Even Steve, the most vocally racist character of all (well, there’s Farnum, but he dresses his talk up more) we finally end up feeling kind of tender towards him. So, yeah, there’s only two Indians in Deadwood, and one’s dead pretty fast (in a ‘needed to be killed way,’ too) and the other’s a head in a box, but still, that dangerous mythmaking most westerns are involved with, where displacement is just an inevitable part of progress, cultures get ground up in the civilization machine, all that, it’s just background noise here, and hardly even context. In the foreground, though, there’s Al Swearengen, standing on his balcony watching the town wake up once again, and wondering what he can steal from it, and finding out what he can give back.

It’s real, Deadwood. I can’t think of any other series, cable or wherever, that’s done anything similar. Even without a proper finale, it’s still one of the best series I’ve lucked into.