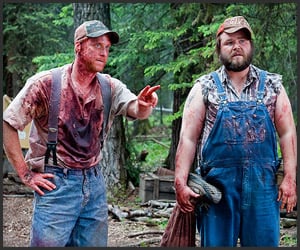 Some movies just make you happy. Feast was this was for me. And Severance. And Leslie Vernon. And, though it’s more over-the-top, Club Dread. Horror comedy’s where it’s at, I think, though there’s a line, yeah; while I’ll sign up any day of the week for a Decampitated viewing, I don’t do so well at the Scary Movie series. I get all the references and jokes, sure, but it’s always a very painful kind of humor, as what they’re lampooning up there, it’s what I love, it’s the horror I hold so close to my heart. No, what I like best is when there’s gore and comedy together. Dead-Alive kind of stuff, or Shaun, or Slither. Fido was even funny, and Scream’s self-deprecating brand of humor is what set it off so well (and, rhetorically, made us believe it in the way we need to believe in horror)—unlike, say with Student Bodies, which is more about gags. Though Return to Horror High got it about right.

Anyway, just dropping all these names because I want to add one more: Tucker & Dale vs. Evil. That it didn’t get wide release—or hasn’t?—is completely beyond me. But then neither did Aah! Zombies!!, I guess, which is doing the same thing, just in another sub-genre: flipping perspective, re-allocating our sympathies. In Aah!, instead of seeing the zombie plague over the shoulders of a ragged band of survivors, we’re with the zombies, who don’t really have bad intent, are just misunderstood. Without giving too much away (I really want everybody to watch it), that’s what’s happening in Tucker & Dale. Or, to say it differently: you’ve all seen Just Before Dawn, right? Of course you have. Tucker & Dale is that story, except now the camera’s with the other group—with the ‘killers.’ And it’s absolutely beautiful. The writing’s great, the escalations are so well-timed, and . . . remember how, when Scream and I Know What You Did Last Summer were hitting, what felt especially cool about them was how all these TV actors were now forty-feet tall, on-screen? So it is here. There’s Cerie from 30 Rock, there’s Brandon Jay McLaran from Harper’s Island, there’s Snuffkin from Sons of Tucson, and on and on, with Alan Tudyk, who’s been everywhere, kind of providing an anchor to the cast. And the lines they’re given, man. They’re all on-target. And writers Eli Craig (he also directed) and Morgan Jurgenson, they know they the slasher genre quite well, and give us all the fun indicators: a “you’re doomed” character early on; a truck grinding up a lonely road, pulling a wood-chipper; a carful of smoking, drinking, scantily-dressed almost-teens. There’s even, for a moment, a giallo-black glove that gets followed, and all the necessary/ridiculous backstory and reveals, and an opening-sacrifice scene (this is so standard) that I suspect sets the record for the fastest one ever (it’s, what? twenty seconds? Yet fully effective). And of course it’s got a ‘final girl’ who has something to overcome, who has to ‘learn’ something in order to get on with ‘her’ life—the slasher here’s just providing the dynamic in which that can happen.

However, for all the fun this has with slashers—with horror in general (the opening’s so Dead Snow, and then it becomes Cabin Fever, etc)—still, I think what Tucker & Dale finally owes more to is Deliverance. Which of course has been Wrong Turned and Hills Have Eyes’d to death. But, as much fun as all of these ‘city people in the country’/urban vs. rural stories have been, they all finally focus more on the banjo music than the character Burt Reynolds played (though, Just Before Dawn doesn’t neglect that dynamic). And, you’ll be pleased to know, Burt Reynolds has been updated here, and, when seen from a different perspective—you can see what Dickey was really saying about us all, I think.

Anyway, to wrap this up before I write all day on it: Tucker & Dale vs. Evil is the absolute most fun I’ve had watching a movie in a long, long time—since Machete, probably, or Hot-Tub Time Machine—and I can’t even begin to recommend it enough. And if you’re into slashers, then I’d call it a guaranteed good time, definitely worthy of repeat viewings.