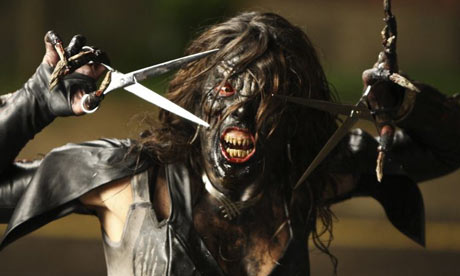 Oh, Doghouse, where have you been my whole life? I’m not saying I haven’t been into the other zombie comedies, the Shaun of the Deads, the Dead & Breakfasts, all the way back to Hysterical! and the splatter comedy Romero was kickstarting in Dawn of the Dead, and all the way up to Ahh!! Zombies! But Doghouse, it’s got the male-bonding (in stupidity) thing going on that Hot-Tub Time Machine had, that The Hangover was kind of predicated on, but it’s got the serious kind of gore we know so well from Severance, from Feast. And it’s such a good balance, to have ‘real’ issues and comical zombie mayhem. The lives and the deaths matter, but you can laugh at them at the same time, and that tension—this brand of movies, it completely understands that the impulse to laugh and the impulse to scream, until the moment of eruption, they’re exactly the same impulse. So, by pairing the laugh with the scream, and on-screen (as opposed to locked within ourselves), they’re dramatizing what we can never quite articulate in the moment. It’s magic. Horror comedy’s my favorite genre, I think. It’s safe and gross and, when done right, revealing, can be a good critique of our own ridiculous selves.

As for the particulars of Doghouse, they kind of make you understand that the best stories are those with the simplest premise: a crew of guys is leaving their spouses—all women but one—for the weekend, to get drunk and loud and crazy, and thereby raise the spirits of one of them, who’s going through a divorce. Except of course the town they’ve chosen to hit, it’s of course been overrun by not just zombies, but female zombies. Evidently this is a gender-specific version of the virus. And, importantly, the infected, they’re much like the zombies in Return of the Living Dead (my personal favorite zombie film), save for the brain-eating part. Though they’re not necessarily averse to brains either, these female zombies. What’s really cool about them, though, it’s that . . . say, one of them, she was a hair stylist in life, evidently. So, in death, she’s now a zombie version of her former self, still with the scissors, her main weapon. And the way they walk (especially the ‘bride’), it’s not like they at all want to get anywhere. It’s all about style, about vamping it up. Very Rocky Horror; very fun. You expect to break out in dance at any moment.

And, what adds an extra layer of fun is all the stuff you could read uncharitably as misogynistic. I wasn’t thinking to keep a scorecard, but, this town of infected zombie women, it’s called “Moodley.” And there’s various running jokes about remote-controlled women, and, even though they’re dead, these guys are still objectifying them, talking about them as if they’re meat. Which all sounds pretty rank and unacceptable, don’t get me wrong. But then the weapons this crew of grown-up boys musters to defend themselves, it’s the stupid stupid tools of their (male) trade—golf clubs, remote control cars, water pistols—which serves to make them look juvenile and worthless and, just like the women (the hair stylist, say), more or less ‘defined’ by their toys. So it all balances out, I think. Doghouse doesn’t take sides between the sexes. Or, maybe it does, but it’s not the side it would seem to be taking. No, here, it’s the women who are the ones who finally don’t let their own natures defeat them. However, the closing shot, it’s trying as hard as it can to undermine that, is doing all it can to valorize the shortsightedness of these boys who never grew up, to treat with nostalgia that which is finally self-destructive—to re-emphasize the ‘boys will be boys’ thing.

So, yeah, you could say the women ‘win’ in this film, or you could argue it’s a story about how evil and corrupt women are. However, as we all know, zombies are genderless. Their reproductive organs are purely vestigial—what they really ‘breed’ with, it’s their mouth. Meaning there’s guys, there’s girls, and then there’s the zombie, which partakes of neither, and, as we see in the closing frames, is going to overtake both, be the true survivor, the rightful inheritor. Post-gender? I’m not even sure what that means, I don’t guess. But fun, that’s a word I know. And Doghouse is the most fun I’ve had with a movie in a long long while. See it the first chance you get, and preferably in a roomful of people. And not just all guys or all girls, either. This is a movie for everybody. Well, everybody with a taste for steaming entrails and split skulls and syrupy black vomit. So: everybody cool, I guess I’m saying.