Why I use my middle name? Aside from how classy it makes me sound? And aside from the fact that everywhere I go, there’s already six or ten Stephen Joneses at the hotel or in the directory or on the waiting list for a table? It’s mostly this guy, the first/real Stephen Jones, who, as bad luck would have it, was already somebody in the horror field by the time I started out:

I get a lot of his mail, yeah, and finally ran into him at WHC14, in Portland:

Also, I’m not this guy either:

And, alas, neither can I play guitar, like Steve Jones: 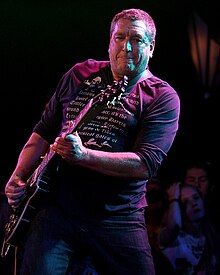 And, good grief, there’s so many of us, really — Stephen Joneses — and there’s more than a few Graham Joneses as well. It makes staking out a social network handle tricky, sometimes (sorry, dude). And, as pronunciation would have it, I’ve been called “Stefan” plenty of times as well, and where there’s any first name, there’ll be a Jones.

While I’m disambiguating, too, I should add that I’m Blackfeet, which is way different from Blackfoot — there’s no singular/plural dynamic going on there — and finally, has nothing to do with Blackfoot the band, though I have over the course of my life ridden a few trains, trains.

So, maybe the best way to know if it’s me? Did I just ask if you’re going to eat all that? That’s a dead giveaway. Or, if you’re in an emergency room, and you think I’m sitting across the way, trying to figure out a cooking magazine: chances are, that’s me. I spend a lot of time in emergency rooms, it seems, and I’ll never understand cooking. Or, if you’re at a junk store, and there’s some guy at the shirt rack, holding a pearl-snap job up along his arms, trying to wish those sleeves longer: it never works. Also, if you blast past some dude pulled over on the side of the road, using a stick to try to flip over a dead fox, or figure out what this is in the raccoon’s mouth: caught. Certain things fascinate me. Or, there’s the old trick of matching me up to some version of a snapshot, too, though that completely takes the Columbo out of it: