Just calling this post that because of the season. And because of course I love Hellbunny.

Anyway, I never did a write-up for how cool World Horror in Salt Lake City was. Got to meet Robert McCammon and have him sign my Boy’s Life (to my son), got see Ellen Datlow some more, got to hang out with Joe Lansdale again, and meet Karen, got to watch a movie Adam Blomquist had with him (The Blood on Satan’s Claw), got to meet Jonathan Martin (of “An Evening with My Comatose Mother“), got to hang out with Orrin Grey again (first time since last WHC, but I think we’ll see each other again at Readercon), got to have to strange, strange experience of sitting at a table alone in a restaurant, reading a book quite happily, then looking over the top of that book and seeing the guy who wrote it standing across the room. Michael Rowe, Enter, Night, which I can’t recommend enough. Then at the Stoker Awards, got to hear Alan Moore’s acceptance speech read (by Scott Edelman and Rocky Wood) and see Richard Matheson on video, accepting for Best Vampire Novel of the Century:

Also, talking cons, I’m at Starfest here shortly. And, check this guest list: could there by anything cooler than being in a list with Dee Wallace? And maybe I’ll run into John Noble or Jonathan Frakes in the con suite. And then just not be able to say anything. And I think I’m on a DigiFest panel or two as well, and am introducing Grindhouse Night 3 (one of the offerings: Tucker & Dale, of course, which I’ve written about). And, still talking cons, I’m toastmaster of MileHiCon before too long here.

And, Seven Spanish Angels and “The Silent Game” (from Plots with Guns) are up for Spinetingler Awards. Feel free to vote ten thousand times. And I’m in Warmed & Bound, which is also up.

And, of maybe-interest — VERY interesting to me — I’m teaching at Clarion West this summer. Also teaching in the low-res program at UCR (and, I’m really not as stretched-out as that pic would suggest).

Oh: got six or seven stories hitting before too long. But I can’t say the names of the places yet. But soon, soon. Along with another book deal. And a couple of interviews showing up, at Curiouser and Curiouser and Solarcide. I think the Solarcide will hit first. And, there’s another interview coming soon as well, but I don’t know if I can announce that out-loud yet (it’s for Growing Up Dead in Texas — and, yes, the ARCs for it are gone gone gone). And I’m also to be included in the Mourning Goats interview book. I also got to say my favorite monster over at Weird Fiction Review (hint: it’s not Bigfoot anymore).

Talking interviews, too, is there anything cooler than Neil Gaiman interviewing Stephen King?

And, talking upcoming stuff I’m excited about: Laird Barron’s The Croning. Paul Tremblay’s Swallowing a Donkey’s Eye. And Underland Press has a cuber punk anthology I want to see as well, though I evidently suck at finding a link to it ever again. 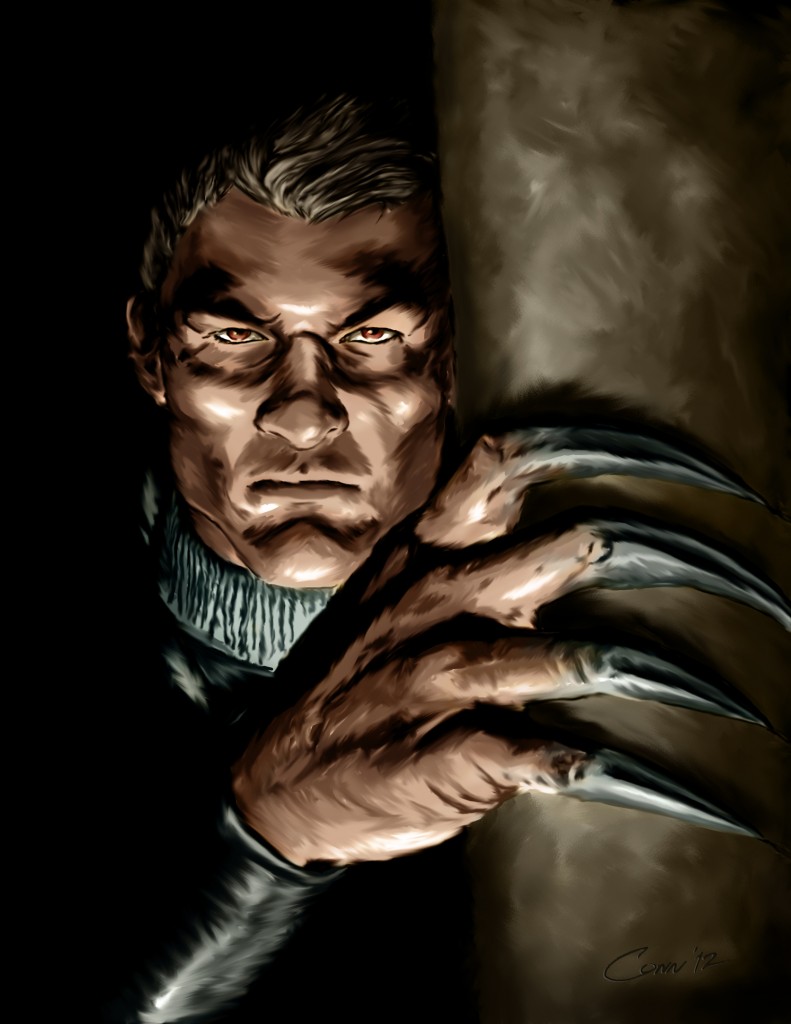 And, my first micro-horror, “Evolution, 2:00am,” it’s up at This is Horror. This pic of the sharp-fingered dude’s from it, and it’s so perfect. And, I guess I’m lying about that being my first super short horror. There’s “Kittens,” at Spinetingler. And surely I linked “Submitted for Your Approval” already, yes? From/at Juked.

Also, three of my old Cult essay things got ported across to Litreactor, here. Also, hey: I’m supposed to have a Cabin in the Woods write-up posting there today as well. Hit a screening last week (thanks to Mike Hance), with Drew Goddard and Amy Acker there afterwards, to Q&A. And, as preview of the review: Cabin rocks. Completely.

And, in the good news category, I’ve been playing hackysack again, finally, and neither my surgery knee nor my twice-surgeried ankle have given out yet. Also, been getting into Bomb‘s metal foot bags lately. They’re great. Still not back on the road- or cross-bike, though. Trying hard to wait till May. And it’s giving me a lot of time to write. Just way too many stories lately. And cranking on a novel as well, of course. And, as for reading, I’m two or three weeks shy of being done with Anne Vandermeer and Jeff Vandermeer’s monumental The Weird. Me and Loverboy, we’re loving every minute of it.